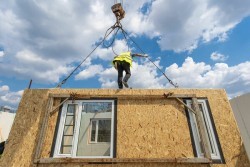 adminOctober 18, 2019Comments Off on Council to deliver modular homes on rooftops0826

Southwark Council’s cabinet resolved on Tuesday to build upward extensions on existing blocks, with residents of the top floors to remain in their homes.

To minimise opposition from people living in affected blocks, the authority has put together a set of “rooftop development principles”.

It will crane in factory-built homes to keep the development process as short as possible and give first refusal on the new units to tenants living directly below them.

And it has promised to carry out improvements to the existing blocks, without charging leaseholders for new roofing, lifts or landscaping.

In an opinion piece for Inside Housing, Leo Pollak, cabinet member for social regeneration, great estates and new council homes at Southwark Council, said: “Councils have traditionally been reluctant to take on rooftop housing at any scale – the anxieties many residents might feel about construction and additional load above their heads could be hard to overcome, leaseholders might challenge the detail of any costs attributable to the development, the numbers of new homes on scheme wouldn’t justify the use of officer time, and so on.

“Southwark are taking a different approach to rooftop housing, recognising both the caution and consideration needed in making a credible offer to residents, but also the enormous potential of upward extensions to provide hundreds (if not thousands) of high-quality, durable new council homes on top of existing blocks.”

Leaseholders will also be offered the chance to purchase a share of one of the new homes above them, with no rent paid on the part they do not own.

Officers are set to start exploring which of the council’s blocks could be suitable for upward extension, while the council is also developing a rooftop design guide.’

Southwark Council will attempt to apply the principles to its existing rooftop schemes – with 44 new homes under construction at the Chilton Grove development using traditional building methods.

Work is also due to start shortly on another 28 rooftop homes in the borough.